Dorothy King was born in Worcestershire in 1920, at the end of the First World War. When the Second World War broke out, she volunteered for the Red Cross and was a nurse in the Civil Nursing Reserve. Wanting a more active part in the War, she signed up in 1941 for the WAAF, who were looking for Signals Personnel. Because of her typing and tele-printer skills, she was eventually posted to a large country house in Buckinghamshire. There messages would arrive – in groups of five letters and numbers – and if in coded language, were taken by a despatch rider to Bletchley (although she didn’t know that at the time). She said it was very boring work, but only realised later how important it was.

Dorothy came to live in Bridge in 1986 to be near her son, and has been actively involved in all aspects of village life, especially the Church where she played the organ for many church services and later was a member of the choir. She was a very active member of WI (Womens’ Institute) where she played the piano for members to sing Jerusalem, organised many quizzes and social functions, and was active with the drama group. She was a member of the Fish Scheme, and was a driver for many years. As a long-standing member or the Horticultural Society, she was a prize winner, at the age of 98!

This September she was thrilled to celebrate her 100th birthday, and was delighted to receive a card of congratulation from the Queen. She still lives in her bungalow, and her room was filled with flowers, cards and gifts from so many people. Because of Covid, she was unable to have the large party she was hoping for, but her WI friends came to her garden, suitably spaced, to sing Happy Birthday, raise a glass and cut a specially made cake. 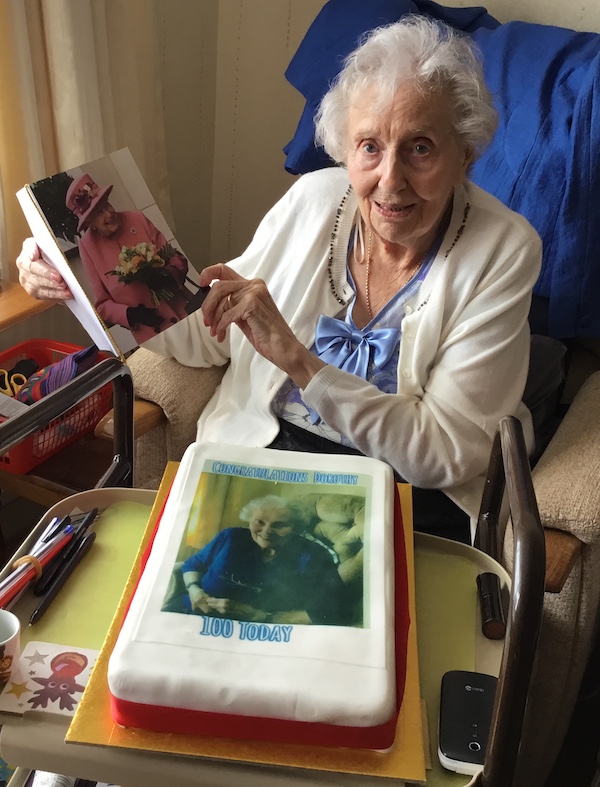 (As told by Dorothy, to Joan Hill)